A Narrative of a Revolutionary Soldier: Some of the Adventures, Dangers, and Sufferings of Joseph Plumb Martin 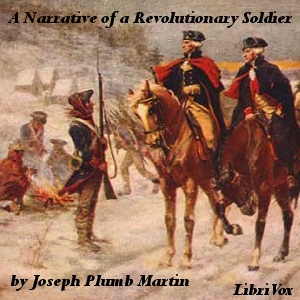 A Narrative of a Revolutionary Soldier: Some of the Adventures, Dangers, and Sufferings of Joseph Plumb Martin

Joining the Continental Army as a teenager, Joseph Plumb Martin spent the next eight years fighting in the Revolutionary War as an enlisted man. His memoirs tell in detail his experiences during that time...the bitter cold, hunger, loss of life, long marches, and fear of battle. He also includes tales of fishing, hunting, and other activities...including encounters with a "saucy miss". His narrative reveals much about American life at the time and is one of the fullest and best accounts of the Revolutionary War, presented from a private's point of view.

The book has been later republished under the names Private Yankee Doodle and Memoir of a Revolutionary Soldier. (Summary by Barry Eads)

Check out the amazon reviews:

And it is extremely well read too!